Fukumi Shimura
Fukumi Shimura was born in 1924. Her first work called Autumn Mist won the prize of the Fifth Exhibition of Japanese Traditional Crafts. In 1983 her work A Color, a Lifetime was awarded the Osaragi Jirou Prize sponsored by the Asahi Shinbun Company. In 1990 she was certified as one of the Preservers of Important Intangible Cultural Properties in the category Tsumugiori (pongee cloth) – a title informally known as a living national treasure. She continues tirelessly her creative work.

The workshop of textile-dyeing artist Fukumi Shimura is located just around the corner from the Buddhist temple Seiryō-ji in the area of Saga on the outskirts of Kyoto. When I turned the corner, a gust of wind, smelling of moist new green leaves, came from Mount Arashiyama standing before my eyes and blew through the gate of the temple behind my back.

Fukumi Shimura’s daughter Yoko and five apprentices were busy dyeing textiles in the workshop. Yoko pointed to the moon calendar hanging on the wall and said: “We decide when to make the indigo colour depending on the phases of the moon.”

Although she is extremely busy with her creative activities, Fukumi Shimura kindly agreed to spare some time to answer my questions. What I wanted to know most was how she had become interested in Goethe’s Theory of Colours and what was meant by “God is in Nature and Nature is in God”. That’s all I wanted to ask the artist whose essays and dyed textiles I had always admired for their beauty only from afar.

Fukumi Shimura encountered Goethe by a happy chance. She had become involved in the Japanese folk art movement Mingei, started by Soetsu Yanagi and after much agonising had become a textile-dyeing artist. On the recommendation of the poet Makoto Ooka, and through the philosopher Yoshito Tanaka, Goethe’s Theory of Colours landed in her the hands. Just at that time she had been tormented by the fact that no matter what she tried, she could not derive green colour from plants but Goethe opened her eyes. “Why can’t I get green? That’s a big problem. What mystery,” recounted Fukumi Shimura her little girl’s bewilderment at the time. “And did you solve the mystery of the green?” I asked. “Of course, I did!” she laughed. “Green plays a big role in providing oxygen. It has been assigned a different task, that’s why I couldn’t derive it as a colour:”

According to her, the oldest piece of dyed textile is a 1200-year-old cloth given to the treasure house Shōsoin by Empress Kohmei. She went searching for its roots in Iran and Turkey but in vain. The fact that Japanese people have preserved this old piece of cloth to the present day proves that they possess the sensibility to appreciate the beauty of Nature although we have not built a theory on that.

Perhaps that’s because instead of leaving writings carved in stone or etched in lamb skin like in the Western world, Japanese people left cloth dyed with plant-derived colours that has survived even wars. For that reason, we can say that the meeting between the contemporary Japanese textile-dyeing artist Fukumi Shimura and the German philosopher Goethe who lived 250 years ago represents a crossover of the thoughts of ancient people who saw the colours of plants under the light. 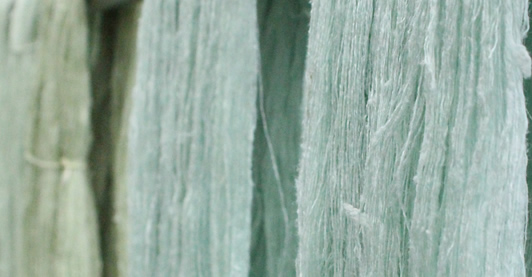 Fukumi Shimura drew a circle on the table and explained that it represented the colour wheel in Goethe’s Theory of Colours. The human body feels that colours, diametrically opposed to each other complement each other and through colour we can prove the existence of a connection between Man and Nature. That’s why when we see the colour of textiles dyed by Fukumi Shimura, it feels “dear to us”. On the day I visited the work shop, a new colour, unseen before, was created. “They say that ‘Nature reveals its secrets to us’, but actually there are no secrets. If you look at something, if you “discover” it, the mystery is dissolved. We experience this every single day!” Her words prove that her encounter with Goethe’s ontological theory of God and Nature actually did not happen by mere chance but was inevitable. The path she had chosen in life led her to it.

The people who lived in the period when the dyed textile treasures were donated to Shōsoin, looked at the colour of plants with those eyes. They transferred the colours they saw onto the thread, weaved the cloth and left it for us. The colours of plants from those days are the same as the colours of plants today. When people of the nobility want to leave something to posterity, they usually leave songs or jewels, which is quite common around the world. Can we leave to posterity the plant colours from Shōsoin that are “dear to us”? Would the people who come after us love those colours and think nostalgically about their mysterious beauty, feeling what we feel when we look at the stars?

At the end, Fukumi Shimura told me the story of a philosophy student who went to the front lines during the Pacific War carrying a book of Kant with him. He wrote in one of his letters:
“I am giving my life to the country and may not come back. But I do believe that there will be someone after me who will continue along the path of philosophy. I couldn’t live without this hope.” The work of Fukumi Shimura, who approaches the creation of colours with the same life-or-death intensity as the philosophy student, is meaningful and important for philosophy as well.

“Our art is dying away but we are fighting to keep it alive”.
Her last words weighed heavily on my mind.

The English edition for this volume is now available on the following Kindle stores in the world.