Nemoto is a communicator who introduces a wide range of books in sign language through some social media. He is originally from Fukushima Prefecture. He was born of deaf parents, graduated from a school for the deaf, and left his hometown to go to the university. He is now working as a teacher at a special needs school in Chiba. He has always been a book lover and has kept reading books in his spare time.

How to Keep a Question that was born in Your Childhood: Interview with Hitoshi Nagai Hitoshi Nagai is now teaching philosophy at Nihon University. He is a leading philosopher and very popular among people with a strong bent for philosophy in Japan. Since he released his first book, The Metaphysics of I!, when he was 34 years old, he has published a book per year on average.

A Note on an Experience of Laughter in Zazen On a sunny Monday on June 23rd 2014, a zazen session was held at the Chizanso in Hayama-cho, Kanagawa Prefecture. 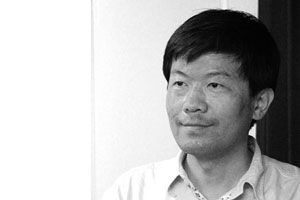 http://philosophy-zoo.com/wp-content/uploads/powerpress/chomsky20101123.mp3Podcast: Play in new window | DownloadSubscribe: Apple Podcasts | RSSInterview : Saori Tanaka In the office of Dr. Chomsky, we saw a small dog with curly grey fur. Apparently it belonged to his secretary. Visitors were constantly coming in and out of Dr. Chomsky’s office and every time the door opened, the dog started running in circles in the open space in front of the office. One of the visitors before us was wearing a black cowboy hat. While waiting, I started petting the dog who immediately rolled over exposing his tummy. When the visitor with the cowboy hat was about to leave, the dog blocked his way, so […]